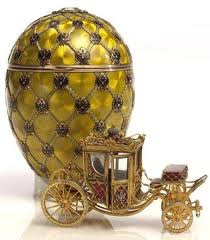 After nine decades in the dark, the mystic jewelry brand Fabergé is back in business with a stunning high-end Faberge jewelry collection.
Les Fabels de Faberge – Fire Bird Brooch
In 1872, Peter Carl Faberge took over his father’s jewelry workshop, which had been established in St. Petersburg in 1842. His technical mastery as a goldsmith put him on par with the world’s most renowned jewelers. He drew his inspiration from the art of earlier generations which he found in the well-stocked treasury of the Hermitage. As Supplier to the Imperial Court of Russia, Faberge is best known for his unique series of 50 jeweled Imperial Easter eggs dating from 1885-1916. His patrons included most of the world’s royalty and other wealthy clientele of his time.
The new House of Fabergé has the cooperation of two of Carl Peter’s great-granddaughters, and investment from a South African private equity firm. And it has just released the first high-end jewelry collection under the name of Fabergé for nearly 100 years. The aim is to reinterpret Fabergé’s work, not reproduce it.
Fabergé selected Parisian artist-jeweler Frederic Zaavy to create an initial collection of 100 items at his studio in Paris. The collection uses hundreds or thousands of tiny gems on each piece to create mosaic effects on rings, brooches, earrings and necklaces. The collection ranges from $58,000 to $8 million. Featured here is one of Tatiana Fabergé’s favorite pieces in the collection, a $335,000 Fire Bird Brooch.
Les Fabels de Faberge
Fabergé took a calculated risk to enter the jewelry market which has been badly hit in the recession, with a new management and design team. In a move that is completely modern, Fabergé has said they will not sell the jewelry through retail outlets. Instead they are using a different model, selling through an ornate website, a Geneva flagship store and 15 sales representatives willing to meet big spenders anywhere in the world. Fabergé may be a new line but it has the benefit of a name that is known everywhere and is synonymous with the upper echelons of luxury.
Source: Extravaganzi
at 1:34 AM