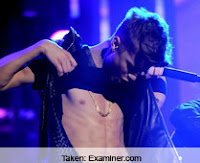 Bieber fever has gripped the majority of the preteen and teen female American populace for quite some years now. However, this boy crooner has also had more than his fair share of haters who have picked him apart on the basis of everything from his squeaky, girly voice to his effeminate looks and his nauseatingly manufactured persona.

Moreover, those who have been constantly dissing him for being stuck in little boy’s body, had a bigger bone to gnaw upon once he turned 18 but still was showing no signs of being manly in the least. However, a recent stunt that the Biebs pulled at a concert on New Year’s Eve has set tongues wagging all over the Grapevine. It seems that Justin Bieber, or the entire branding machinery of agents, record label and PR personnel behind him never meant for him bursting forth as beefcake material for his teeny bopper (read teeny Bieber) fans to swoon and scream even more.

In what is apparent as a page from the days of a young Mark Whalberg who was still sporting his “Marky Mark” persona back in 1991, Justin Bieber parted his shirt to reveal a set of abs above the band of his briefs peeking out from his jeans. The image akin to the one that Whalberg, who is now a sort of style mentor for the transitioning Bieber, made iconic more than two decades ago has become dubbed as “Justin Bieber bares chest at concert” all over popular media. Let’s see whether his abs get more ripped than his rapping!