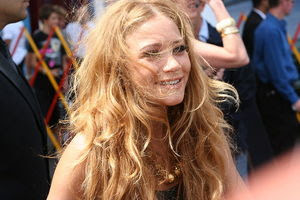 Younger Sis to Olsen Twins Has Been Hiding Right in Front of Us
Who is Elizabeth Olsen and where have those Olsen twins been hiding her? Well, it turns out that Mary-Kate and Ashley's little sis Elizabeth has been in the public eye from a young age, we just never paid her much attention. Which is odd, given how much she resembles her famous sisters. Now the 21-year-old is set to star in a movie and should gain public attention with her own success. Elizabeth Olsen Set to Star in Indie Flick. According to Reuters, Elizabeth Olsen (also known as Lizzie Olsen) has just finished shooting "Peace, Love and Misunderstanding," where she plays Jane Fonda's character's granddaughter, Zoe. During filming, Fonda noted on her blog that "when her face is seen on the screen in this movie it'll be hard for her not to do more films."
Resource: Associated Content
at 3:12 AM